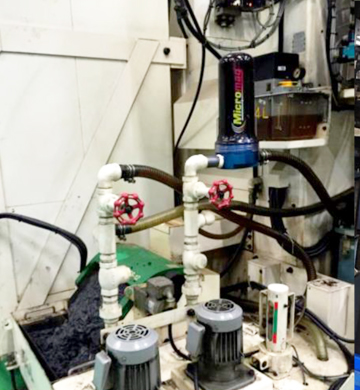 The plant has a standard room inspection facility wherein they have a CNC Mode Checking For Tooth Profile & Lead Error which is used For Spur / Helical Gears & Shaving Cutters Accuracy Check. It was noticed that due to the corroding of the gear teeth, there was immense machine down-time and high rejection. Main cause due to due to ferrous contamination in the
coolants.

Initially trial was done on one shaving machine which was successful. Eventually, 46 Micromag MM10 were fitted, in only one plant, one on each machine. In response to the global market, Musashi Group is strongly promoting the worldwide network system through five global bases (Japan, North America, South America, Europe, Asia), and also established sales
offices in Europe and North America.

After the success rate of the Micromags, trials are also going on with the Filtramag FM1.5 & FM2.5 for their honing, grinding & washing machines.